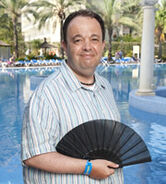 Add a photo to this gallery

Gavin Ramsbottom is a character from Benidorm, played by Hugh Sachs. Gavin is a camp, over-weight hairdresser on holiday with his partner, Troy (Paul Bazely). He is by far the camper of the two and has a tendency to be 'bitchy'. By the second series they are married. In the fourth series he returns with colleague Keneth while Troys at home comforting his dad. In the fifth series Gavin returns alone to visit Kenneth as he and Troy had an argument possibly ending the relationship. Troy however returns in the eighth series and starts up a new hair salon named blow and go. He appoints his fellow piers Kenneth and Liam as the hairdressers and as a friendly gesture to console his friend Jacqueline, he lets her become a partner in his business.

Retrieved from "https://benidorm.fandom.com/wiki/Gavin_Ramsbottom?oldid=6169"
Community content is available under CC-BY-SA unless otherwise noted.